Inside Dave Bauer’s radio shack, the sound of Morse code mixed with the drone of an electric fan.

The dots and dashes were faint over the static of the amateur radio waves — the sender was using a small kit radio, Bauer explained — and to the untrained ear sounded like a pale symphony of dying clicks. But for 79-year-old Bauer, those tones came into his ear like language.

“For me, the code isn’t dots and dashes,” he said, sitting in front of his radios. “It’s letters. It’s words.”

The coded message continued to play over the radio inside his shack — really his daughter’s old bedroom inside his Ladner home. Surrounding him was technology: three radios, some microphones, several gauges and, of course, his Morse code keys.

“I still use it primarily,” Bauer said about the code. It’s been his go-to mode of communication since the mid-1950s, when Bauer first entered the world of amateur radio and became a ham, slang for a certified amateur radio operator.

Back then, Bauer was a teen working summers on his uncle’s farm in Ontario. He had always been intrigued by the radio that sat on top of his family’s refrigerator — “how on earth did that little voice come out of that little box from far, far away?” — and then one year an amateur radio appeared on the farm.

But before Bauer could use it, he needed to learn Morse code.

“Working on the farm, ploughing the fields … I just memorized it,” he said. “Everything I saw I would spell out in Morse code. I was obsessed with it.”

By 1957, Bauer had become a ham, and he’s been using the knowledge ever since.

Now, Bauer is one of 81 members of the Delta Amateur Radio Society (DARS), a local association of hams that meets once a week, alternating between North and South Delta.

“One of our biggest problems is finding enough space to meet,” society president Dave Miller said. The 58-year-old hadn’t been a member of the club long before becoming president, although he has been a ham since his college years.

“It seems a lot of people are joining the club because there’s a lot happening here,” he explained.

Since 2012, the number of amateur radio operators in the club has increased significantly. Back then, there were around 60 members. In 2017, it was at a high of 98.

Now there are just over 80; about 20 people show up to the meetings at the North Delta Public Safety Building every second week. In South Delta, where they meet at the South Delta Recreation Centre, the number is closer to 26.

At each meeting, the society focuses on a different aspect of amateur radio. One meeting may be about business, while another will look at emergency preparedness. Another night may have a presentation from an outside speaker, while the fourth meeting could be a discussion of one member’s passion project.

“Clubs go in cycles,” Miller said. “We’re just now in a cycle where we’ve got some new people in and little bit more enthusiasm … and they claim it’s because there’s stuff happening.”

There is the association’s field day, where hams go out into a rural area and attempt to make contacts with just their radios and a generator, and the society’s certification course, were new hams can get a crash lesson in amateur radio.

But one of the society’s main happenings is something that has kept the club running since it was first started in 1980 by a man named Wilf Whitworth.

According to DARS’s website, Whitworth was approached by the municipality in the late 1970s with a request: Delta wanted him to form a group of amateur radio operators in order to create a communications network that would work with the municipality’s emergency measures organization.

At that time, about 140 local hams met in East Delta to discuss the proposal. In October 1980, 22 hams met in Tsawwassen to formally found the amateur radio society.

The society has been a key part of the city’s emergency plan ever since.

“The unique thing about amateur radio stuff, there’s really no infrastructure required,” Miller explained. The society has two “grab-and-go” radio kits located at the North Delta Public Safety Building. With them, radio operators can communicate with people, and even send email through the radio waves.

Currently, around 30 hams are part of the club’s emergency operations. Tsawwassen’s Chris Kane, who passed his certification with flying colours at the end of 2017, is one of them.

“My hope is that if there is a catastrophic event out here, that I could somehow be of benefit to my family and friends in Delta,” Kane said.

“You know, when you’re younger you sort of take, and then you sort of get older and you feel remorseful for your actions, so you want to give,” he said, with a joking tone in his voice. “So I decided I wanted to try and help out the community by volunteering.”

As a member of the emergency radio team, Kane is called out to practice simulated emergencies like Shake Out B.C. But emergencies themselves are often few and far between, which means many hams spend their time volunteering at community events.

So far, Kane has done two: Ladner May Days, and the White Spot | Delta Road Race at the Tour de Delta.

“That’s kind of my level of interest in it now,” Kane said. “[I’m] trying to use this kind of interest I have in radio to see if I can be of help to the community.”

The call sign was faint over the radio in the North Delta Public Safety Building. Jeanne Wilson and a group of other new hams struggled to make it out.

Bauer was teaching the group how to use a high-frequency radio — something a little more complex than the hand-held radios often used by beginning hams and emergency operators. But he had a trick in mind.

Unbeknownst to his class, Bauer had turned the dial to a caller from Malpelo Island, an islet 500 km west of the Colombian mainland, uninhabited except for a small military post. A radio operator had made their way out there as part of a DX Pedition (pronounced “dee expedition,” it’s a play on dx, the radio shorthand for long distance), and hams around the world were trying to make contact.

Wilson continued to struggle. Then she made out the call sign. Then, at Bauer’s urging, she got on the mic and made contact.

Wilson remembered the smile that came across Bauer’s face.

The moment changed Wilson’s focus in amateur radio. Although she started at age 55 with a drive for emergency operations, she soon switched her focus to long distance competitions.

Over the years — Wilson is 63 now — she has made contacts in more than 100 countries, getting nearly a third of the available DX Pedition locations. This past year, she also travelled with 17 other hams to Vimy Ridge, helping man a radio shack during the 100th anniversary of the battle.

“I can tell you, it felt really good to be chased on the air,” she said. “It was probably one of the highlights of my life.”

DX Peditions tend to be crowning achievements for hams. For Bauer, a DX Pedition contact in Antarctica came second only to the first contact he ever made.

Bauer worked for weeks to reach the team in Antarctica, struggling to even hear their call sign. Then, in desperation, he decided to do something unusual: turn the antenna around.

There are two ways for a radio wave to travel to a location. The first is the short way, where the antenna is pointed towards the place you want to reach, and the wave bounces along until it gets there. But, you can also go the long way, pointing the antenna in the opposite direction and letting the wave travel around the world until it reaches the location from the other side.

That’s what Bauer did in his final Hail Mary.

“Although he had to ask me two or three times for my call, and I had to get confirmation several times from him, we finally made contact,” Bauer remembered. “I thought, ‘Woah.’ See, that’s really stretching the process and proving just how far you can get with minimal signals with the right conditions and knowledge.

“Just from that point of view, that was one of my biggest thrills.”

Bauer’s biggest thrill could have only happened because of his biggest passion: technology.

“I love anything new. I always have,” he said. 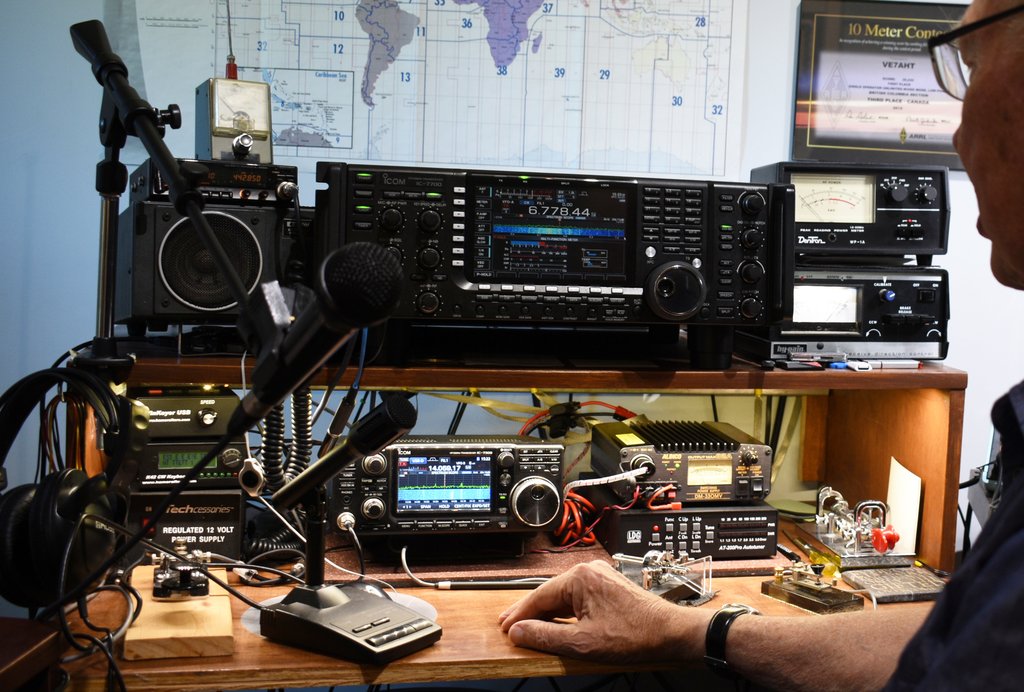 On his computer, a software program allowed him to identify the call signs and locations of radio operators reaching out. Several of the radios sitting on his desk were only a few months old (several of his friends had already sold those radios to get even newer models, he said). And sitting beneath his soldering iron was a small radio he made from a kit.

“It has less power than a typical LED lamp,” Bauer said, looking at the silver box that housed the tiny radio. “It’s about two watts of power. And you can actually make contacts with that stupid thing. It’s just mind-boggling.”

But, he added, “the reason I built it is because it’s technically extremely advanced.”

Radios use amplifiers to increase the intensity, or size, of the sound wave. In many radios, this is done with relatively simple techniques: some have an amplifier that allows the wave to come out the same way it goes in, only bigger. Others use two components that each increase half of the sound wave. And then there’s the Class E amplifier, which is what was inside of Bauer’s kit radio.

In a Class E amplifier, the sound wave switches on and off multiple transistors, which then uses resonate circuits to restore it back into a sound wave.

“It’s highly efficient, but … very tricky to run,” Bauer said. “So that hooked me.

“As soon as I saw it: Ooh, Class E amplifier. I believe I will go after that.”

The drawing that showed Bauer how to build the kit was complicated in the extreme, at least to a layman’s eye. But “it’s part of the joy,” he said.

“Just building it is fun, all by itself,” he said. “And then when it works it’s an absolute surprise.”

Each year, DARS holds a four-week amateur radio certification course, which gives budding hams the tools they need to qualify for their amateur radio operator certificate. (This year’s course begins on Sept. 12, and will be held on Wednesday evenings and Saturdays.)

Certification is the start of what is, for many, a life-long hobby.

“That’s really the coolest thing about it,” Miller said. “There are some people in our group that in their young teens got certified, and those people are now in their 80s and 90s and still playing.”

The reason amateur radio holds such staying power is because of its diversity, whether hams are long-distance contact chasers, propeller-head techies or emergency preparedness buffs.

“And that’s what will make us continue to go long-term,” Miller added, speaking about the society. Having more people involved in the hobby will help the club continue, but more importantly, it will help make sure everyone continues to find something fun in amateur radio.

“That’s the whole purpose of this club,” Wilson said, “is to have fun.”

CORRECTION: An earlier version of this article said DARS meets at the Tsawwassen CoPS every other week. They actually meet at the South Delta Recreation Centre. The article has been updated to reflect this correction, and we regret the error.