Terry McComas doesn’t beat around the bush when it comes to astronomy.

Take the plate-shaped galaxy Andromeda. There’s good news and bad news, he says – and the bad news is about as bad as it gets.

“It is coming absolutely straight at our galaxy and there isn’t a darn thing that anyone can ever do about it,” he says.

On the upside, that catastrophic collision is “about four billion years down the road.”

The tidbit was just one of many McComas, a Surrey resident, shared during a recent interview with Peace Arch News.

Another is that it will take several minutes after the sun dies before anyone on Earth – assuming there is anyone here to notice – realizes it has happened. Yet another is the fact that had Jupiter – fifth rock from the sun and the largest planet in the solar system – been just a hint bigger, we’d have two sunrises.

“Isn’t that cool?” McComas says, the excitement in his voice unmistakable despite the fact his night-owl lifestyle means hasn’t seen a sunrise in around 10 years.

Still another fun fact relates to telescopes – and it’s not one you’ll find jotted in any instruction booklet detailing what the equipment is capable of, either. In short, they could be described as time machines, McComas gleams.

“When you put your eye to a telescope and look at Andromeda, that light left Andromeda about 2.3 million years ago. And that is before evolution even approached the idea not only of coming up with humankind, but even coming up with any of our ancestors,” he explains.

“The first time I heard that, it threw me. It took some measurable time to wrap my mind around it – a telescope is quite literally a tool for rolling back time.”

Sharing his passion for astronomy has been an exercise McComas has delighted in for the past decade – including during a visit to White Rock Library in January – through his involvement with the Royal Astronomical Society of Canada. The organization, launched by eight men in Toronto on Dec. 1, 1868, today has a membership of more than 5,000.

RASC “supports men, women and youth in their quest to learn more about the universe,” according to the organization’s website.

And that quest, McComas notes, doesn’t have to involve massive spending on super high-tech equipment. In fact, one thing he tells families who are interested in exploring the skies with their kids is, start with binoculars. It’s something many families already have, he says, and offers a wider scope that makes it easier to take in and understand what’s being observed.

“So if I look at the sky with my binoculars at say, Cassiopeia, which is a really easy constellation because it looks like a big W… I can see all of Cassiopeia at once, so I will know the relationship of those five bright stars.

“If I take out my telescope and look at Cassiopeia, chances are extremely high that I’m going to be looking at one, two, maybe three of the stars. So, having binoculars really gives one a sense as to how constellations fit together. It gives you an idea as to how small patches of the sky are organized and from that, it makes it that much easier to figure out how all the constellations are organized.

“Binoculars are where it’s at.”

McComas, 73, describes himself as a lifelong “science guy,” someone who was hard-wired with the interest. He got hooked on chemistry during high school, when a teacher wowed the class with an experiment that produced “pops and bangs, and ballooned smoke,” with a crescendo of hot iron pouring out of the reaction vessel.

The interest led to a career with Health Canada, where he says he was “the guy that helped police actually decide if they’d picked up heroin or someone’s baking powder,” and even testified in court about his findings when asked.

“It was very cool initially,” McComas says. “But after you’ve seen your millionth bag of marijuana, it kind of loses its cachet.

“It does happen,” he adds, referring to the heroin/baking product issue.

Retired since 2011, McComas’ other interests include global warming, animal advocacy and the Vancouver Jewish Film Festival. A longtime sponsor of the latter, which most recently took place last month, McComas says the films he takes in – and in this case, there were 28 of them – “provides me things to kind of ruminate over for months.”

His interest in astronomy exploded a decade ago, after he finally got something he’d “lusted after” for 50 years – a Questar telescope. Reading about them as a kid in Scientific American is what first sparked his interest in all things celestial, he says, in particular learning that the brand is what NASA chose when they first decided to give hand-held telescopes to their astronauts, he says.

Asked to define astronomy, McComas says it is “the observation of everything in the sky.” And stargazers, he says, come in “all different sizes and flavours” – from those like himself who are interested in all things bright, to those who are fascinated by far-away, dim things, to those who dedicate their entire careers to studying dark matter.

“To be a stargazer, you have to kind of shift gears, you know – like, scale,” he says, describing the relative insignificance of White Rock, the Earth, the sun and even the Milky Way to the bigger picture that astronomy entails.

“Perhaps the biggest benefit I haven’t mentioned is, it keeps you humble,” he says. “When you think, ‘ah, I’m so worried about my – fill in the blank –’ and then you look at the sky, and you’re so trivial and unimportant. You’re barely an atom on an ant.

For more information about RASC and webinars that are currently being live-streamed, visit rasc.ca/covid 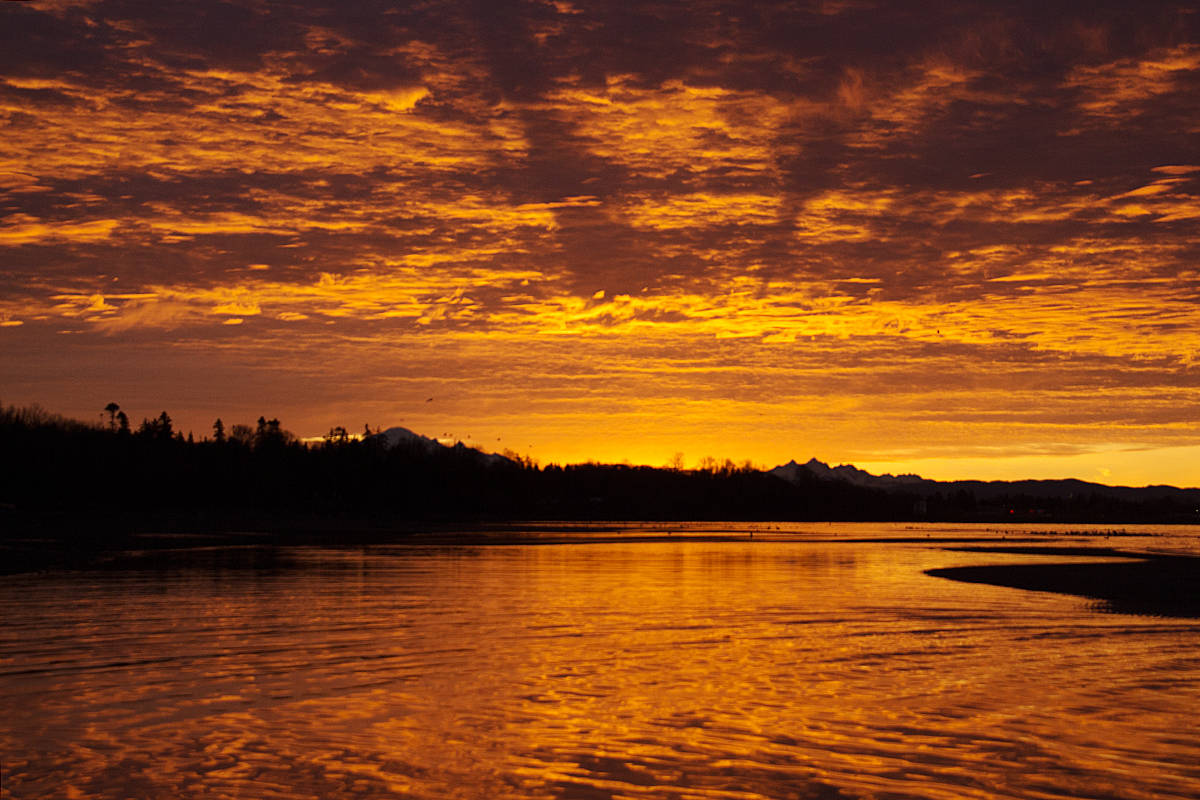 Semiahmoo Peninsula photographer Ethan Dykstra was one of a few photographers who ventured to the White Rock beach early one morning last year to capture a golden sunrise over Semiahmoo Bay. Astronomy buff Terry McComas says if Jupiter were just a hair bigger, we’d be seeing two of these at a time. (Ethan Dykstra photo)

‘I love you this much’: B.C. firefighters share drone video on two-metre physical distancing

‘We still want to celebrate our graduates, their achievements, and their resilience’

About 30% of B.C. students return to schools as in-class teaching restarts amid pandemic

Bateman program encourages people to sketch outside, connect with nature

Samples to be sent to lab for testing