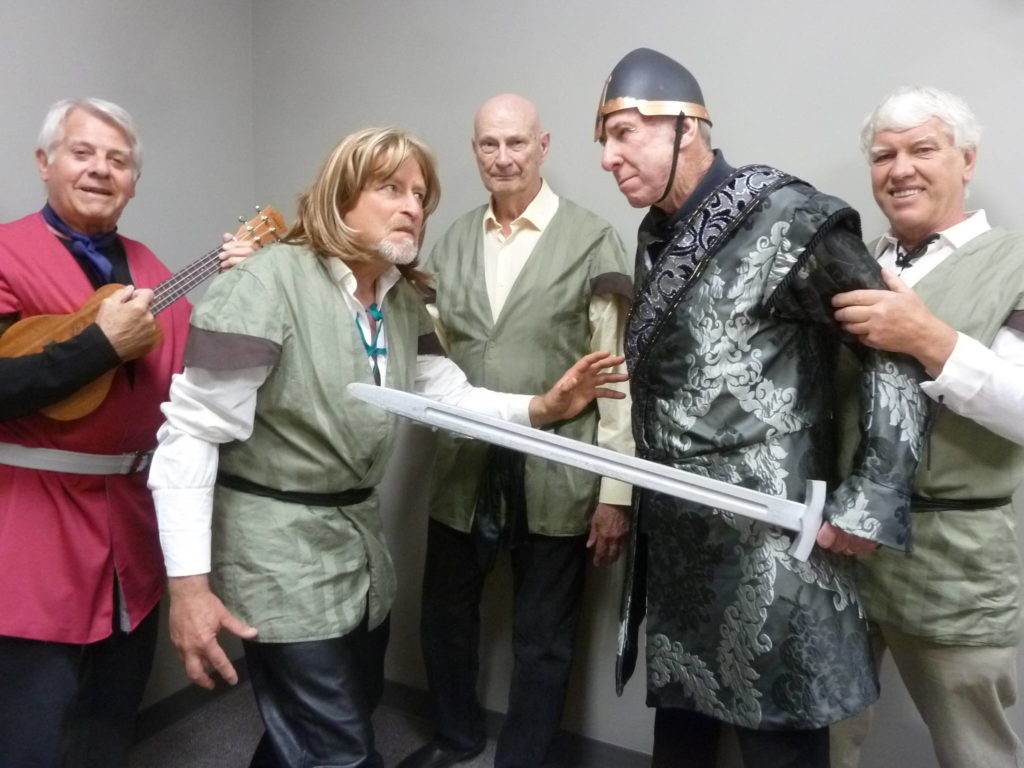 The Pacific Showtime Chorus is serious about just one thing – singing.

Whenever a music cue comes up, you can count on this all-male ensemble to deliver well-blended, thoroughly-rehearsed and completely memorized four-part harmony.

But don’t expect them to take much of anything else too seriously – whether it’s themselves as actors, or the plots and themes dreamed up for their well-received annual spring shows.

As fans of the productions should know by now, while providing a framework for the songs, the ‘book’ of each of the musicals is mainly an excuse for the Semiahmoo Peninsula’s own jesters of song to let their hammier instincts run riot.

That’s certainly the case with their latest flight of fancy, Robin Hood and his Merry Olde Men, coming to the Royal Canadian Legion Crescent Branch 240 on Saturday, June 8 in both a 2 p.m. matinee and a 7:30 p.m. evening performance.

With a title that’s a typically wry nod and wink to both the medieval legend and a certain chronological maturity of the group, the show is billed as “a comedic musical tale of wit and song set in the deep woods of Sherwood Forest.”

Robin (Bruce Kleeberger) and his men must thwart the evil plan of Prince John (Richie Traer) – and his main henchman, the Sheriff of Nottingham (Leigh Anderson) – to impose a ban on singing in Sherwood Forest.

Peppered throughout the story are a slew of recognizable songs identified with such favourite classic pop artists as The Beatles, The Beach Boys, Paul Simon and John Denver.

It’s a concept that seems tailor-made for the ensemble – and, indeed, has been, by their group’s musical director and piano accompanist (and also the show’s writer, producer, and director) Jonathan Wiltse.

“I think it was Jonathan’s idea from the start,” said Robin Browne – who plays the role of wandering minstrel Alan A’ Dale – during a recent visit of costumed chorus members to Peace Arch News.

“He wrote his version of the Robin Hood story, selected most of the material, and arranged some of it.”

“He has a couple of other choruses he directs, he has his own one-man variety show, as well as teaching piano and voice,” explained Kleeberger.

“He’s pretty valuable to us. We want to keep him, and keep him happy, and the spring show is a major part of being able to support our habit – which is Jonathan.”

The chorus received Robin Hood and his Merry Olde Men in November and started preparing the songs at the same time as their Christmas program, Kleeberger said.

“At the same time Jonathan came out with it, there was a new Robin Hood movie and the White Rock Players Club was doing a Robin Hood pantomime,” Anderson said.

“We’re usually leading the trend, not following it – but everyone (in the chorus) bought into this script right away. It has an interesting song selection, and all but one of the songs are new for us.”

While he’s ostensibly the Sheriff, his character is under no illusions about his autonomy, Anderson said – a situation not unknown in political circles.

“In reality, he’s a long-suffering assistant of Prince John, and spends most of his days humouring the prince, who’s a little nuts,” he added. “He’d love to put Robin away, but he’s never really been successful.”

That seems like it will change during the course of the show – but in the end everything hinges on the outcome of an archery contest.

For Browne, playing Alan A’ Dale means that he spends most of the show clutching a lute – which some might say looks suspiciously like a ukulele.

“It is a lute,” he insists, deadpan. “They didn’t have ukuleles back then (in Robin Hood’s time) so, ergo it’s a lute. Who can deny that logic?”

Other featured roles go to Terry Bucknell, as Friar Tuck, Rod Neske as strong, but naive, Little John and Joe Vanderark (whose wife Irene created many of the costumes, while daughter Emily painted the sets he built for the show) as a Merry Olde Man.

“I love doing this sort of a show,” Neske said. “I don’t like just standing up and singing – I really like the theatre part that goes with it.”

Vanderark and Neske agreed that – in Wiltse’s interpretation, at least – the challenge of being a Merry Olde Man has as much to do with Robin himself as the nefarious schemes of the obvious bad guys.

“We’re shocked sometimes at what Robin is doing – we signed up to steal from the rich and give to the poor, but that may go sideways from time to time,” Vanderark said.

“This particular Robin Hood is flawed,” Kleeberger admitted. “If he lived in another century, he’d probably be called Robin of Hollywood rather than Robin of Sherwood. He’s a little bit more about the image rather than the substance.”

Part of the fun of rehearsals, the chorus members agreed, is that the show continues to be a work in progress right down to the wire.

The script that Wiltse provided at the start of rehearsals is seen as more of a general guideline, Kleeberger noted.

“It evolves – it’s evolving as we speak,” he said.

“We anticipate that there will be some improvisation to the performance.”

“And if there is a hiccup, we know how to make it fun,” Anderson added.

“If you can’t laugh at yourself, you’re in the wrong group,” Kleeberger said.