The CN freight train that derailed near New Hazelton — spilling coal into Mission Creek — left the track because of a broken axle.

It has happened before, and it can happen again.

That is according to a Transportation Safety Board of Canada (TSB) report released Thursday.

The TSB report concludes that the routine visual inspection could not have detected the fatigue cracks in the axle the cracked part is concealed by wheel bearing components.

The train received a certified car inspection in Prince George four days before the Jan. 19, 2018 derailment. A pull-by inspection was also performed at the last crew change in Smithers, where it left from the morning of the derailment.

“Without alternate strategies to identify fatigue cracks or to predict the likelihood of fatigue cracks developing, problematic axles might not be removed from service in a timely manner, increasing the risk of broken-axle derailments,” concludes the media release that accompanied the report.

“The Board is unaware of any safety action that has been taken as a result of this occurrence,” reads the only sentence under the heading ‘safety action taken.’

The New Hazelton derailment is not unique. The TSB report reads that from 2008-2017, there were 23 derailments on CN and Canadian Pacific Railway tracks caused by a broken axle. Nine of the axles broke like in the New Hazelton incident: near the journal fillet radius, the area between where the wheel and wheel bearing is mounted on the axle.

The TSB report could not pin down the exact cause of the 52nd of 199 cars’ axle fatigue, but did say, “fatigue cracks are known to result from abnormal cyclic loading due to a number of reasons, such as a wheel tread defect, a general out-of-roundness, or uneven loading from railcar truck components.”

The axle was manufactured in 1981 by Valdunes in France, repaired in January 2000, last maintained with the wheels in Prince George in January 2014. The report said with new wheels and roller bearings, axles can remain in service “up to or beyond 40 years…”

A request has been made with CN for comment on the report and whether the company has plans to address the axle inspection situation.

There were no injuries caused by the derailment and no dangerous goods were involved.

The three crew members — an engineer, conductor and a third member on a familiarization trip — came to a screeching stop when at about 7:18 a.m. while travelling 29 mph when there was a train-initiated emergency brake application. The crew reported no anomalies before the braking.

The B.C. Ministry of Environment and Climate Change Strategy monitored the site clean-up and recovery activities conducted by CN to ensure they met regulatory requirements. About 2,900 tons of thermal coal was dumped, with 2,800 or 97 per cent recovered. A small, unspecified amount of that spilled into Mission Creek.

Along with the 199 cars, 27 of which derailed, there were two locomotives at the head and one mid-train. The 50th to 76th cars derailed.

None of the cars were overloaded. The train weighed 28,069 tons and was 10,785 feet long, according to the TSB report. 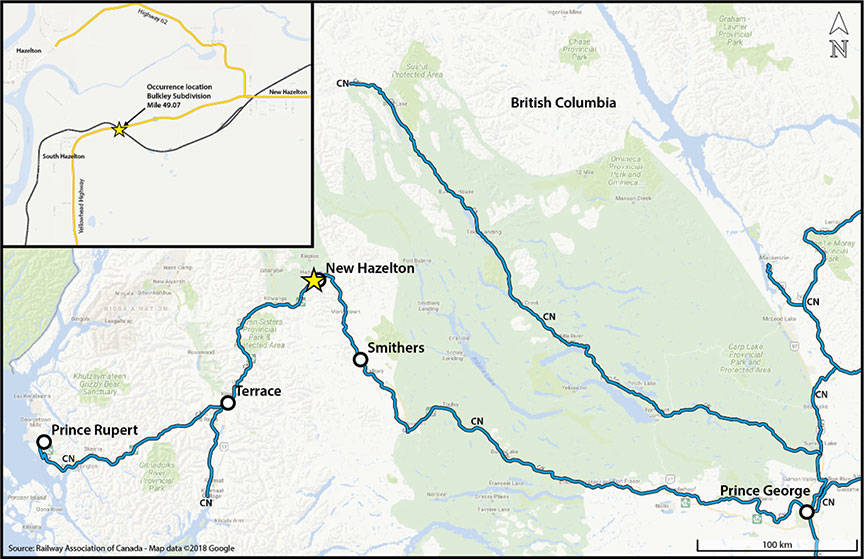 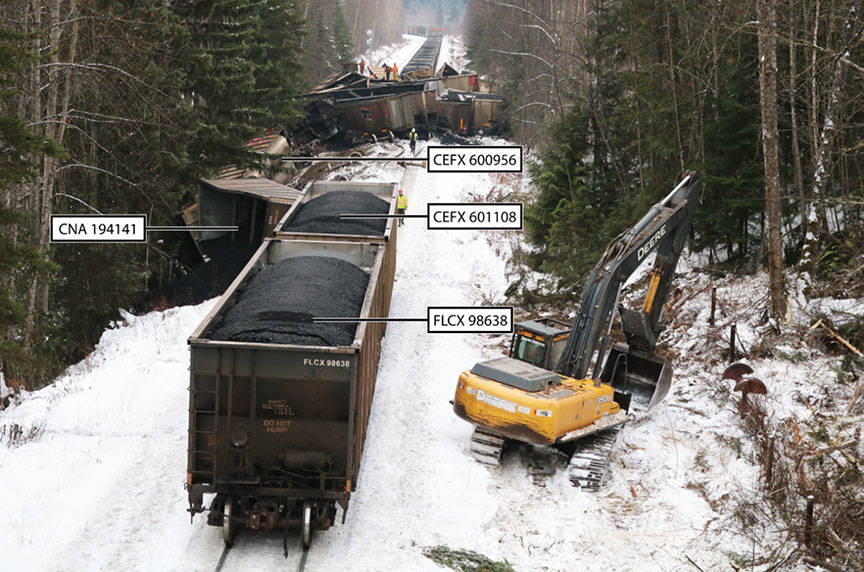 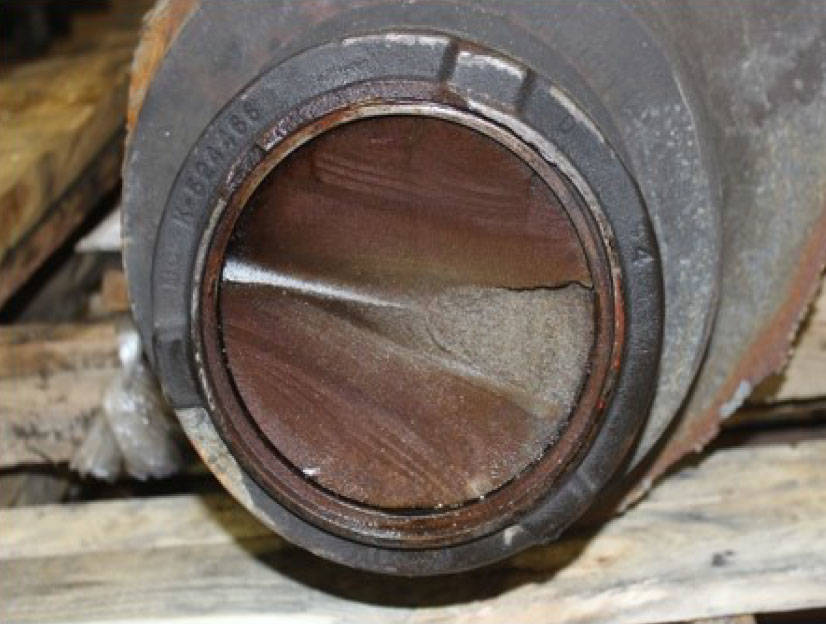 Mating fracture surface from the broken axle at the L1 bearing. View toward centre of axle. (TSB photo) 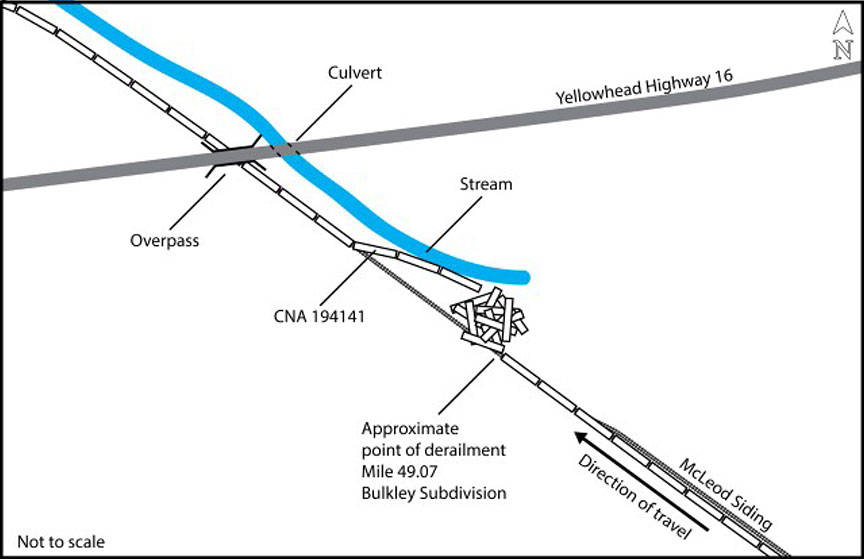 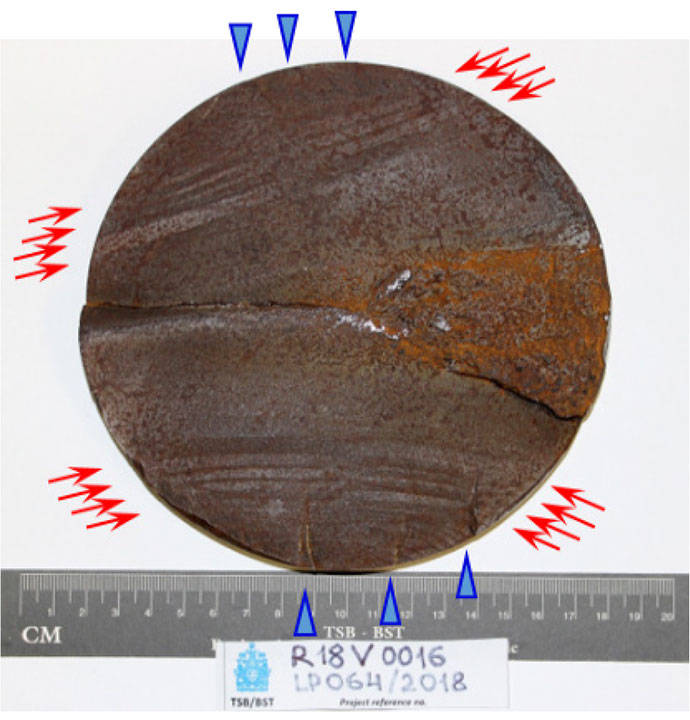 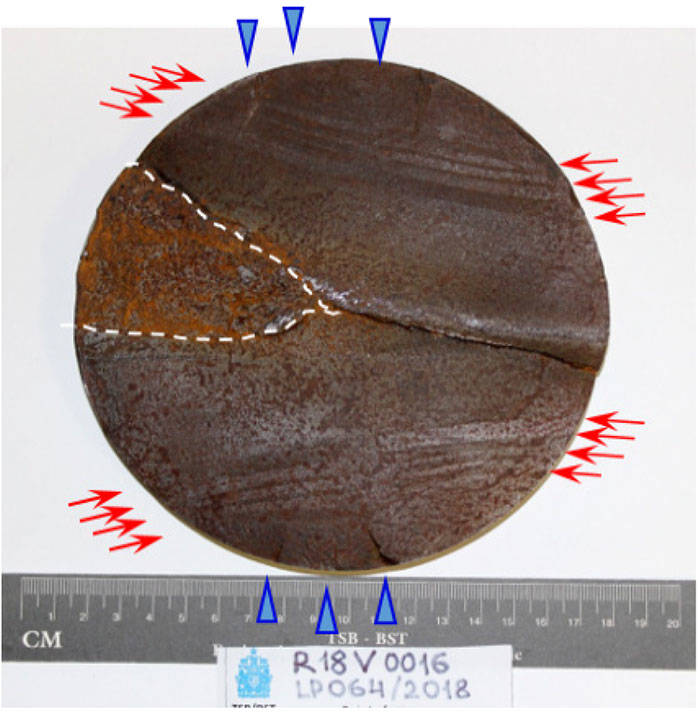 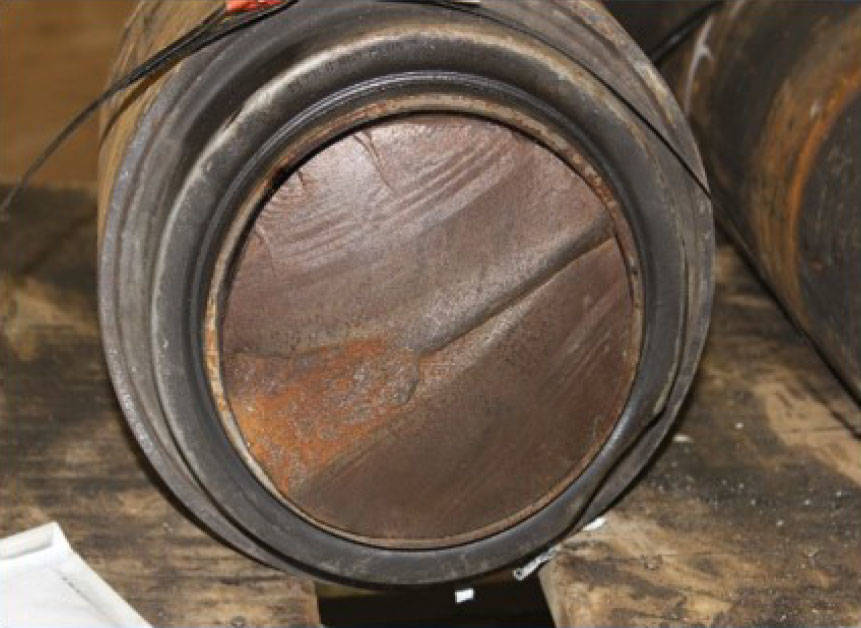