When Hurricane Freda blew through Surrey nearly 60 years ago, W. W. Hastings and Stan McKinnon were among photographers quick to document the destruction caused by the strongest storm ever recorded to hit the Pacific Northwest.

On that Friday, Oct. 12, 1962, Freda knocked down power lines, smashed some buildings and claimed the life of at least one Surrey resident.

Highways worker Bill Sands was killed when a log was flipped into the air by the sudden release of wires, near Highway 10 and 192nd Street (Latimer Road), according to a Surrey Leader news story at the time.

“Telephone, Hydro, road crews and volunteer firemen worked through the night and all day Sunday, answering calls and getting a start on the stupendous job of getting essential services rolling again,” the newspaper reported.

“The miracle was that no one has been injured trying to handle power lines.” 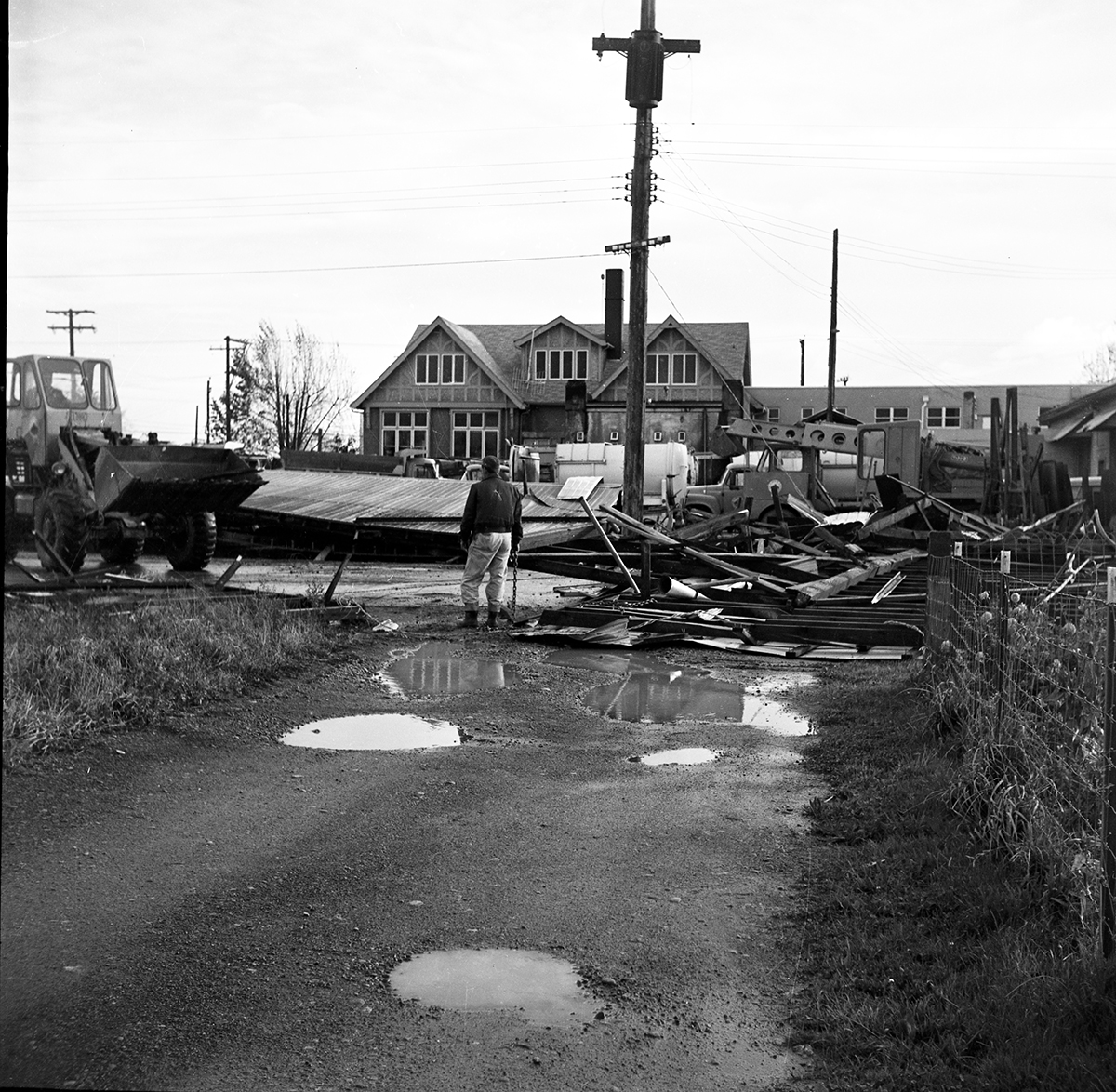 PICTURED: Damage caused by Hurricane Freda, which hit Surrey and the rest of the Lower Mainland on Oct. 12, 1962. (Photo: Stan McKinnon/Surrey Archives)

For many residents, power was cut for up to a week, and schools were closed due to structural damage and a lack of electricity.

The hurricane – or typhoon, as some call it – caused more than $600 million in damages, in today’s dollars.

Some call Freda “The Storm of the Century,” while residents of Washington State and Oregon know it as the “Columbus Day Storm.”

The storm wasn’t expected to be so powerful, according to a “Remembering Freda” post on BC Hydro’s website: “Freda was born of a tropical depression in the Pacific that began south of Hawaii on October 3. It weakened as it approached the west coast, though, and Freda was downgraded to a tropical storm. What meteorologists hadn’t predicted was that Freda’s remnants would combine with another low pressure system. The effect was, in some respects, worse than a typhoon.”

Winds gusted through Vancouver at up to 145 kilometres per hour, and Stanley Park lost 20 per cent of its old growth, some 3,000 trees, including 500-year-old-cedars.

PICTURED: Cars travel on an unknown stretch of road in the Port Kells area of Surrey following Hurricane Freda’s destruction, on Oct. 12, 1962. Telephone poles hang over the road as wires scatter on the pavement. (Photo: Stan McKinnon/Surrey Archives)

In Surrey, the city’s new municipal hall was damaged to the tune of $10,000 when a window blew out on the exposed back entrance, facing Highway 10. “This entrance then acted as a funnel, blowing out the main entrance on the north side of the building,” according to the Leader story of Oct. 18, 1962.

“Everywhere throughout the district the reports were the same. Heavily treed areas such as Ocean Park, Crescent Heights and Panorama Ridge looked like a battle scene. Jagged stumps and uprooted trees lay scattered around, with limbs piled in heaps.”

In the post-storm edition of the Leader, Dann’s Electronics in Cloverdale advertised some ruined merchandise. “We lost our store windows through the hurricane winds,” the ad read, “and our stock suffered wind and water damage. This stock has been drastically reduced to clear” – $59.95 for a long- and short-range radio regularly priced at $129.95.

“I remember that they closed the school and, I believe, I was at Johnston Heights Junior Secondary at the time,” recalled Joanne Clayton. “And we had to walk home in that hurricane. To me, as a child, it did not seem as severe as people were talking about on the news and things like that. The newspaper later gave a more descriptive idea of it. But, it was windy and it was wet and we had to walk home because everybody’s parent was at work and there was no other way for us to get home than walk in the driving rain. And so we did. A group of us got together and sort of faced the wind and walked home in it.”

Another Freda memory, from Yvonne Abernethy: “We had two children at the time and we were without power for, gosh, I guess, a week. And, of course, without power our fridge wouldn’t run, we had no electricity, we had no heat, there were so many trees and things down over the roads and the power lines and things. They took, gosh, weeks for them to get everybody back.”

Surrey Now & Then is a weekly look back at Surrey-area landmark sites and events, and how they evolved over the years. Email story ideas and tips to tom.zillich@surreynowleader.com. We thank Surrey Archives for assistance with this series.

Advance voter turnout up in all Surrey ridings except Newton