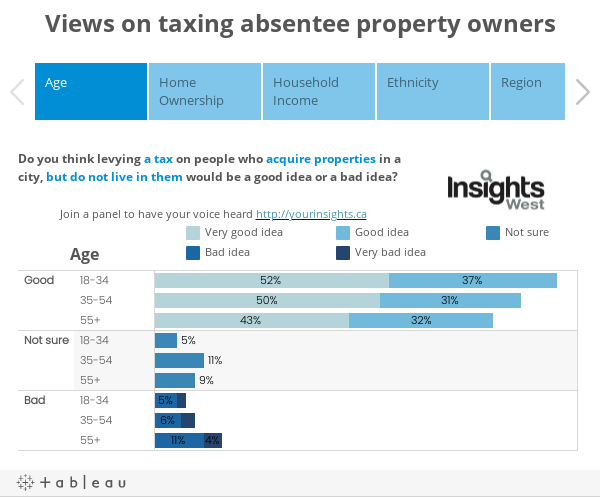 A new poll suggests B.C. residents are overwhelmingly dissatisfied with the province’s response to

The Insights West online survey found 80 per cent support for a tax on buyers who invest in property here but don’t live in those homes, up seven points from a year ago.

Eighty-eight per cent agreed that those who own homes but don’t live in them “are speculators and not really part of the community.

The survey comes in the wake of new statistics showing Lower Mainland house prices have jumped at least 37 per cent over the past year, and gained 7.7 per cent in May alone.

The Bank of Canada on Thursday cautioned that recent property price gains in Vancouver in particular are not likely sustainable and that a sharp correction could trigger a severe recession.

Insights West spokesman Mario Canseco said the concern about housing affordability threatens to be a significant issue for voters in next year’s provincial election.

The poll found 76 per cent of B.C. residents are dissatisfied with the provincial government’s response.

“It will definitely be one of the central issues of the campaign,” Canseco predicted.

“For a long time we had the economy and jobs as the number one issue facing the province. Now it’s housing, homelessness and poverty. It’s climbing at a more rapid pace than I would say health care or the environment.”

While the BC Liberals have cracked down on unethical practices of some realtors, they have so far avoided any major steps that would deter foreign investment in B.C. real estate.

Canseco said the government has time to roll out new policies that answer the demand of voters – especially millennials who feel they’re swiftly being frozen out of the housing market – or leave the field to the Opposition.

Millennial voters demonstrated in the federal election that they do vote, he said, contradicting a sense after the 2013 provincial election that younger voters mattered less than had previously been thought.

The government needs to find a way to connect with those voters, Canseco added.

“It’s going to be tough to campaign on the promise of LNG again, which is one of the reasons they did so well last time.”

Other levels of government don’t get a pass on the housing issue either, according to the Insights West poll.